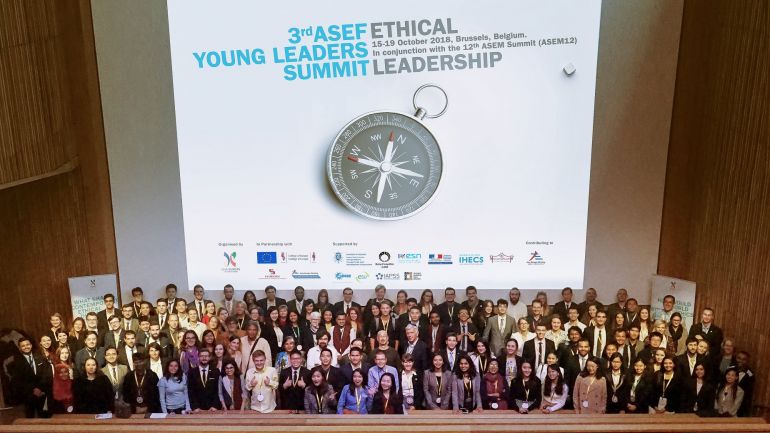 The third edition of the ASEM Young Leaders Summit (ASEFYLS), themed on ‘Ethical Leadership’ gathered 120 participants from 51 ASEM partner countries in Brussels from 15 – 19 October 2018. Held in conjunction with 12th ASEM Summit (ASEM12), participants collectively investigated three critical levels of leadership, namely: self-leadership (you), team leadership (we), and societal leadership (all), and the role of ethics in these leadership levels, through a series of discussions, workshops and planning sessions.

The participants were divided into 10 thematic groups during the preparatory phase and had to present their ideas for a spin-off activity they wished to conduct once the summit has been concluded, the winning team being provided with a grant from the Asia-Europe Foundation (ASEF).

Besides the young leaders, the forum also witnessed leaders from politics, business and civil society joining as speakers, panellists and facilitators. Key elements of the programme included the dinner hosted by Their Majesties the King and the Queen of Belgium for 31 selected participants as well as frequent interactions between ASEM senior and junior leaders, resulting in an approximate total of 15 meetings. The 3rd ASEF Young Leaders Summit (ASEFYLS3) concluded with two participants presenting a collective youth intervention at the opening plenary of the 12th ASEM Summit (ASEM12), in the presence of leaders from 51 Asian and European Countries, the EU and the ASEAN, further echoing ASEFEdu’s work in bringing the youth voice into the ASEM Process. (Text by ASEF)

More information on the ASEFYLS3 and updates can be found on the website of ASEF.