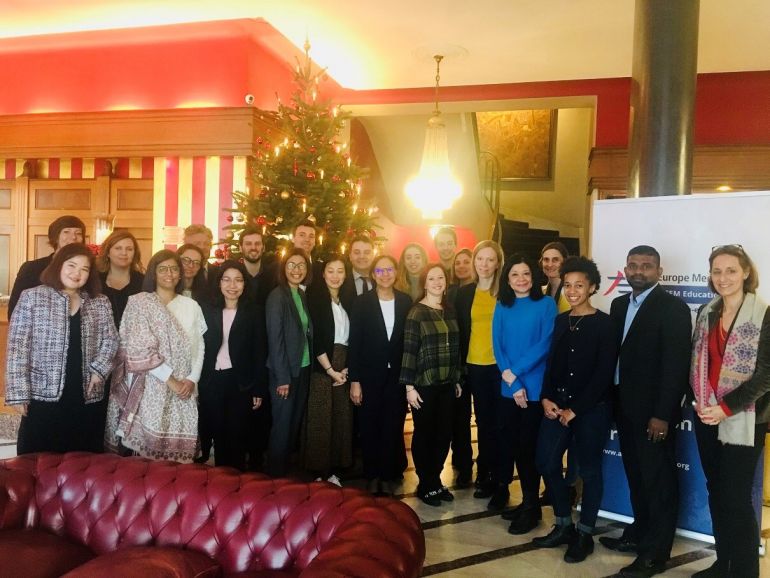 The ASEM Education Secretariat Belgium hosted the Kick-Off Meeting of the Standing Group (SWG) on 9 and 10 December 2019 in Hotel Savoy, Berlin, Germany. The establishment and the role of the Standing Working Group was approved by the Ministers during ASEMME7 in Bucharest, in May 2019. In July 2019, the AES invited all ASEM Partners and Stakeholders to become a member of the SWG and the following partners and stakeholders have accepted the invitation: Austria, Belgium (French and Flemish Community), France, Germany including representative of German Academic Exchange Services (DAAD), India, Latvia, Malaysia, the Netherlands, Thailand and the European Commission, the ASEAN University Network (AUN), the Asia-Europe Foundation (ASEF), Asia-Europe Institute (University of Malaya), European Students Network (ESN), European Training Foundation (ETF), the European University Association (EUA), the International Association of Universities (IAU) and the South-East Asian Ministers of Education Organization – Regional Centre for Higher Education Development (SEAMEO-RIHED).

Starting from a preliminary online questionnaire and some interactive brainstorm exercises during the meeting, the participants formulated their expectations on the ASEM Education Vision & Strategy 2030 and its aims. Also the tasks and the roles of the Standing Working Group and its Chairs (the 3 next hosts: India, Germany and Thailand) had been further elaborated and integrated in the draft Terms Of References.

The next step was the discussion on the structure and the different building blocks of the Vision & Strategy 2030 based on examples and formats of existing strategies.

The 2nd day of the SWG Kick-off Meeting started with 2 presentations: the first one by Prof. Dr. Azirah Hashim and her PhD Student Mr. M.Miandy on how the higher education is embedded in the ASEM Education Process and the 2nd presentation was provided by Leonie Nagarajan about the newly proposed concept of the ASEF’s Rectors Conference and Student’s Forum (ARC).

The remaining time of the meeting was mainly focusing on defining the steps and milestones as well as a task division for the Vision & Strategy 2030 drafting process. The SWG-members agreed that the ISOM in New Delhi in April will be used as a platform to collect input, ideas and suggestions of all participants for the Strategy document. After the first draft of the SWG, there will be a feedback round and discussion during the SOM1 in Germany. Another feedback round will be organised for the final draft to be discussed during SOM2 and presented and hopefully endorsed by the Ministers during ASEMME8 in Thailand. The AES will circulate the different drafts and collect the feedback from ASEM Partners and Stakeholders throughout the process and will keep you updated on the work of the Standing Working Group and will send out the schedule of the drafting process and the feedback rounds soon.