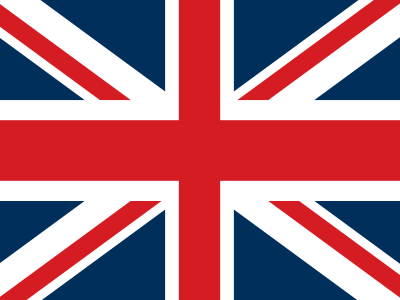 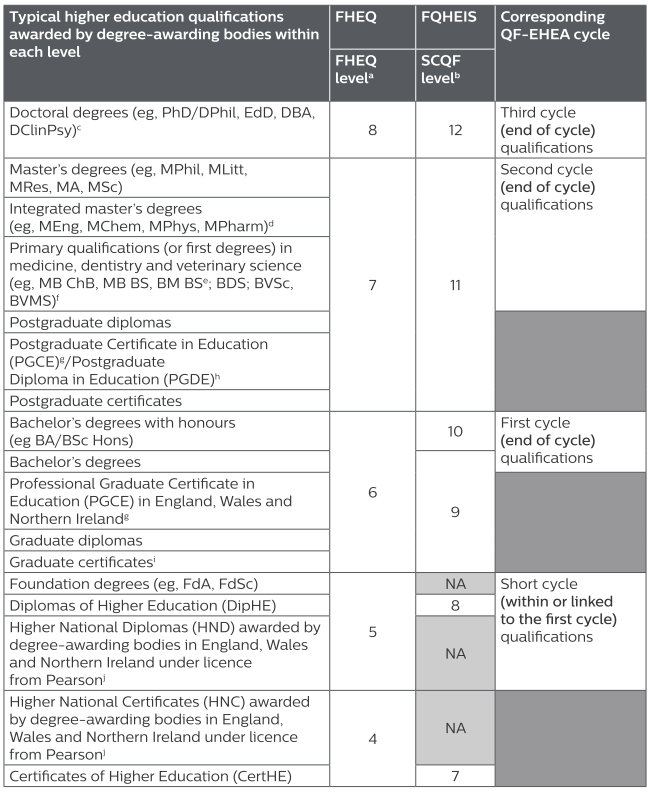 Bachelor degrees are typically three or four years in duration. They may be Ordinary or Honours degrees, though Ordinary degrees are now rarely awarded outside of Scotland. Bachelor degrees are usually associated with 360-480 UK credits or 180-240 ECTS credits. Some Scottish universities may also confer an award known as a Master of Arts, which, despite the title, constitutes an undergraduate degree.

Doctorates typically require three years’ study / research, but do not tend to be credit-rated. Professional doctorates may, however, relate to a minimum of 540 UK credits, corresponding to 270 ECTS credits.

Many other awards feature on the Framework for Higher Education Qualifications (FHEQ), but are less commonly awarded.

The Certificate of Higher Education and Higher National Certificate typically correspond to one year of undergraduate study in academic or vocational fields, respectively.

The Graduate Certificate and Graduate Diploma are Bachelor level awards, and are typically up to one year in duration. They are usually pursued by those who already hold a Bachelor degree in one area and wish to retrain in a different field.

Integrated Master’s degrees represent a minimum of four years’ combined undergraduate and postgraduate study. At least one academic year must be dedicated to Master’s level study.

The Department for Education (DfE) includes 178 Recognised Bodies and 680 Listed Bodies in its official listing in October 2018.

It should, however, be noted that the responsibility for publishing these lists will shortly be transferred to the Office for Students (OfS).

According to data from the Higher Education Statistics Agency (HESA), there were 1,766,285 undergraduate students and 551,595 postgraduate students in the UK during the 2016-17 academic year.

There is no clear data on the number of students enrolled directly with a Recognised Body and those studying for a higher education programme at a Listed Body.

According to HESA, there were 442,350 overseas-domiciled students enrolled in UK higher education during the 2016-17 academic year.

Data regarding exchange students with credit transfer was not publicly available.

The academic year is typically divided into two semesters and thus examinations may be sat in both the winter and summer.

The period of study for postgraduate programmes will vary. Master’s degree students will often study for a full calendar year, for example October to October.

These frameworks apply to all qualifications awarded by UK degree-awarding bodies. Both frameworks are maintained, reviewed and developed by the QAA.

The UK frameworks use qualification descriptors to exemplify the general nature and outcomes of the main type of qualification at each level.

The first part of each descriptor is a statement of outcomes which a student should be able to demonstrate for the award of the qualification. Degree-awarding bodies use these when designing, approving, assessing and reviewing programmes to ensure that the learning opportunities and assessment within the programme enable students to achieve and demonstrate achievement of the learning outcomes.

The QAA also publishes Subject Benchmark Statements which describe the nature of study and academic standards expected of Bachelor Honours degree and Master’s degree graduates in specific subject areas. The Statements provide guidance to be used in the design, delivery and review of academic programmes.

UK universities are autonomous and set their own admission requirements. As such, there is no national legislation covering international student admissions.

The UK Quality Code for Higher Education sets out the following expectation about recruitment, selection and admission to higher education, which providers are required to meet:

Undergraduate admissions are handled by the Universities and Colleges Admissions Service (UCAS), which oversees the admissions process and provides information to students on entry requirements for specific programmes. Prospective UK and most international students apply through UCAS. Grades achieved in different qualifications (including a small number of international awards) are converted to a numerical points score, using a system known as the UCAS Tariff. Entry requirements may be expressed in terms of UCAS Tariff points, but many providers specify qualifications, subjects and grades.

Bachelor degrees with Honours are classified as follows (in descending order of rank):

Individual courses are usually graded on a percentage scale, with a pass mark of 40%. Grading systems may vary between institutions.

Master’s degrees are awarded with Distinction, Merit or Pass. Individual courses are usually graded on a percentage scale, often with a pass mark of 50%. Grading systems may vary between institutions.

Doctorates are not given a classification or a grade.

Publically-funded higher education institutions charge two tuition fee rates: one for ‘home’ students and one for ‘overseas’ students. Fees for international students vary depending on the institution and programme studied. In 2017, ‘overseas’ fees for Bachelor degree programmes were generally between £10,000 and £35,000 per year.

Students from within the EU currently pay the ‘home’ rate, which, at undergraduate level, is capped at £9,250 per year in England, £9,000 in Wales and £4,030 in Northern Ireland (2018). There are no fees for ‘home’ undergraduate students in Scotland. EU students are also eligible for the same financial support (tuition fee and maintenance loans) as UK students. It has been confirmed that this will continue until 2019/20.

Private higher education institutions, which do not receive public funding, set their own tuition fee levels for both ‘home’ and ‘overseas’ students.

Degree-awarding bodies are responsible for ensuring that student performance is assessed against defined standards and qualifications are only awarded when the relevant learning outcomes have been achieved.

The Scottish Credit and Qualifications Framework (SCQF) uses credits to quantify learning outcomes. Many higher education institutions in the rest of the UK use the national Credit Accumulation and Transfer Scheme (CATS). In both systems, one credit is equal to 10 hours of learning time.

The following credit values are associated with higher education qualifications:

The European Credit Transfer and Accumulation System (ECTS) may also be used. One ECTS credit is equal to two CATS / SCQF points.

The OfS have assumed responsibility for the Recognised and Listed Bodies listing from the DfE and will be publishing their own list later in 2018.

The OfS also distributes government higher education funding to more than 300 providers in England. Annual funding that supports research is now the responsibility of Research England.

Teaching Excellence and Student Outcomes Framework
The Teaching Excellence and Student Outcomes Framework (TEF) was introduced by the government in England in 2017. It assesses teaching, learning and students outcomes upon graduation. Institutions may then receive a gold, silver or bronze award. Participation is currently voluntary, but universities and colleges in England that are registered with the Office for Students will have to take part in the TEF in future. Publicly funded providers holding a TEF in England may charge the higher maximum tuition fee for 2018 entrants (£9,250 per year).

GPA Grading
There has been some discussion about the possibility of introducing a GPA grading system in UK higher education. If introduced, this may replace, or simply supplement, the existing degree classification system. Work in this area has been conducted by the Burgess Implementation Steering Group and the Higher Education Academy.

Regulation of higher education is an area of devolved responsibility in the UK, so England, Wales, Scotland and Northern Ireland each have different regulatory bodies and frameworks.

The Quality Assurance Agency for Higher Education (QAA) performs quality and standards assessment functions to support the regulatory process across the UK.

The QAA, established in 1997, is responsible for:

Further information:
Further details on all current review processes can be found at: http://www.qaa.ac.uk//en/reviewing-higher-education/types-of-review .
The review processes have been through various incarnations through the years. In some cases, transitional measures have been put in place. For example, the Quality Review Visit, which is primarily designed to test a provider’s readiness to enter the publicly-funded UK higher education sector, has recently been used to evaluate providers that were scheduled for a now obsolete Higher Education Review (HER) and have not had two or more successful reviews under the previous quality assessment arrangements.

The QAA conducts a variety of different types of review at institutional level, depending on provider type and location within the UK. There is no separate system for programme authorisation or accreditation.

There is no list of all recognised / accredited programmes in the UK.

Listed Bodies are providers without their own degree-awarding powers, which deliver programmes leading to degrees awarded by Recognised Bodies.

1 No longer updated. From April 2018, the newly established independent regulatory body for England, the Office for Students (OfS), assumed responsibility for the Listed and Recognised Bodies (England) orders. As part of its remit, the OfS maintains the OfS Register of all registered providers. Providers are currently being registered before the new Regulatory Framework for higher education in England comes into full effect on 31 July 2019. Transitional regulatory arrangements are in place until then. Arrangements for the listings for Wales, Scotland and Northern Ireland are still to be confirmed.

There is no nationally operated credit transfer system in the UK or a body with overarching responsibility for credit recognition and transfer opportunities.

Across the UK, the national Credit Accumulation and Transfer Scheme (CATS) is used by many higher education institutions, most prominently by the Open University (OU).

No. There is no mandatory credit transfer system in the UK or a body with overarching responsibility for credit recognition and transfer opportunities.

Each higher education awarding body determines what credit it will accept for purposes of accumulation or transfer in relation to its individual programmes.

The number of credits per standard academic year depends upon the system being used:

The number of credits per higher education cycle varies, but there are credit values typically associated with programmes leading to particular qualifications:

CATS: Credits are not generally used for PhD programmes. Professional doctorates are a minimum of 540 points, with at least 360 points at FHEQ level 8.

SCQF: Credits are not generally used for PhD programmes. Professional doctorates are a minimum of 540 credits with at least 420 credits at SCQF level 12.

In the UK, learning outcomes and credits are intrinsically linked. For instance: